Report on the Purvis memorial lecture on 19th October 2015

The Prior Rick Hudson welcomed members and invited Past Prior Bro John Walker to give his talk entitled, “A High Street Golden Wedding”. This was the Purvis Memorial Lecture.

Bro John began by saying a few words about Augustinian, the Rev. J.S.Purvis. He was a keen historian and a key player in the setting up of the Borthwick Institute historical archive at York University.

The Golden Wedding referred to by Bro John was that of William and Mary Milner who ran an ironmongers shop at 70 High Street. Bro John showed a photograph of part of the family taken on the day and explained the family tree. Remarkably he was also able to show a table set out for the celebration at the Green Dragon Inn which once stood on Westgate, and also the bill for the event. William married Mary in 1865. They were staunch Methodists but married at Christchurch which was sanctified for marriage. Bro John explained that he would use the Golden Wedding and records of their business activities as a framework to illustrate life in the Old Town in this period.

The double bow windowed shop front has changed little. It was recognisable in an old photograph which showed wire netting, a tin bath, a dolly tub, and a dolly hanging outside. Mary was active in the business and one half of the window seems to be hers. You could buy a pair of “button kid boots” from her for £43 at today’s prices. Bro John showed orders and receipts which gave a peek into Old Town life. In 1885 Mr Banks of Swiss Cottage ordered a Gilbert and Sullivan score, then brand new and very popular. The Royal and Independent Order of Shepherds ordered a number of crooks for their new members – “must be brass”. The Milners bought meat from Sawden the butcher, and the infamous cough mixture from Gatenby the chemist. Once taken, you daren’t cough. Times were changing though. When Holtby’s son took over his father’s grocers shop he changed it to sell cycles and motorcycles.

William was interviewed by the Chronicle in 1914 after 50 years in business. He described how when he opened his shop, all the towns people visited the Old Town to conduct their business, but over the years the banks, the courts, council meetings, etc. had gradually moved to Quay. William however was always in the thick of it, active with the Feoffees, the Masons, charity committees, the Harbour Commissioners and so on. He was also chairman of the Bridlington Gas Company for 40 years. Bro John showed a receipt for his subscription to the Conservative and Unionist Association and several of his annual passes to the Princes Parade starting in 1871, which at today’s prices would cost £45. He also showed that he had shares in the Great Northern railway and Welsh Slate, and all told had an investment income alone equivalent today to about £20,000 per annum.

William worked hard and was lucky to have a long and healthy life. He retired in 1929 after 65 years in business and died in 1931 aged 89.

The vote of thanks was given by Pam Quigley. She thanked John for another enthralling and entertaining evening, and hoped he would keep the talks coming. 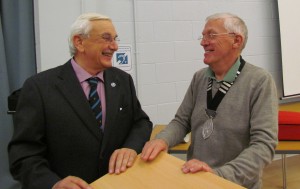 The Prior Bro Rick Hudson enjoys a joke with the Bro John Walker after his presentation.

Local History at its Best