The Spa Miniature Railway was located by the boating pool, to the south of the Bridlington Spa complex.  The lifeboat house now occupies this site. It operated from 1951 until 1967.

In March 1951 the Council accepted an offer by Mr Robin D Butterell to operate a miniature railway on the Spa promenade with rides to be priced at 6d per person.  Mr Butterell had previously operated a miniature railway at Llandudno in North Wales. He brought over the same locomotive and rolling stock he had used there, which he originally purchased from Jos Liversage of Herne Bay.

The locomotive, a Bassett Lowke 4-4-0 Southern Railway outline model for 7.25” gauge, was reboilered just before its use at Bridlington. Robin Butterell operated with railway with his friend Brian Rogers whom he met whilst studying architecture.  It proved to be more economically successful in Bridlington than in Llandudno.  The Council undertook some drainage improvements requested by Mr Butterell but did not provide the water supply he requested.  Mr Butterell also requested permission to extend the track.  I do not know whether this happened.  After two years they wanted to continue their studies and sold the railway to local man Mr R Rowe.  The Council had an option to buy but did not take this up. Robin Butterell became a well known writer and activist on miniature railways with books and regular magazine articles to his credit.  He died on 8th May 2007. 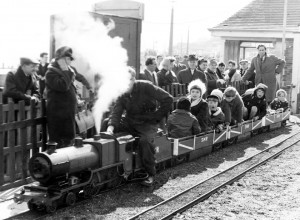 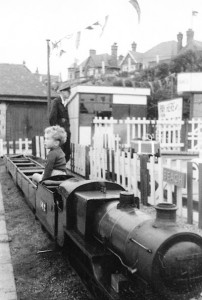 The new owner was a Flamborough barber and he operated the railway with his son Michael.

In 1954 the attraction “gadget golf” next to the railway ceased and Mr Rowe came to an agreement with the Council to ensure the cashier he shared with golf attraction was retained.  The railway had passing loops at each end with spring points. At the pay booth end there was also and a partial turn table and a brick engine shed. Mr Rowe was given several operating extensions by the Council and the railway ran until the 1967 season.

We hear that at the end of 1967 the Council were planning to use part of what was the railway site for an electric car ride.

Until 2019 we did not know what happened to the locomotive, but we can now tell you that the loco built originally in 1937 is still operating in private ownership on the Wortley Forge Model Engineers Miniature Railway.  The bogies from the rolling stock are now used on the elevated track riding cars at West Park in Hull.

Clearly these photographs are late enough to be still in copyright.  The photographers or publishers to whom the copyright belongs are unknown however.  If you know who owns the copyright please let us know by using the form on the Contact Us page.

Local History at its Best